What We Ate Wednesday: Starring My Husband 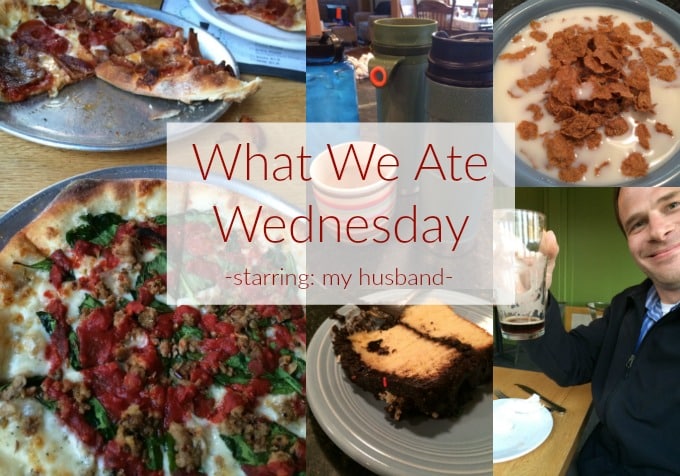 Hello readers. Real Dad here. Sally has once again “volun-told” me to track and provide commentary on my food intake for a day. Those of you who read what I ate the last time may notice some familiar patterns. Please, allow me to explain further. 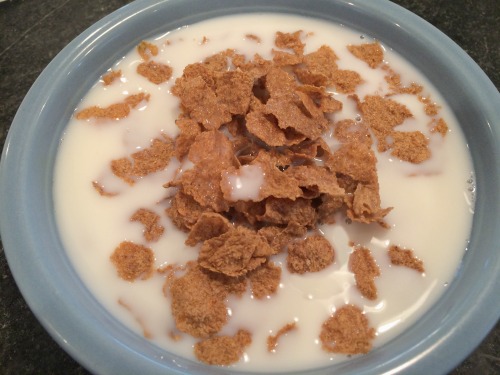 I’ve said it before – I’m no foodie. If something tastes fine and it’s easy to make, I’ll mindlessly eat it day after day for weeks, months, years. I especially gravitate toward boring, routine breakfasts that don’t require any thought to prepare. I was on a homemade granola kick for a long time last year, then I decided to take a break, and Sally started buying packaged granola that’s always reliably tasty. However, out-of-town travels the past two weekends have disrupted Sal’s usual grocery shopping schedule. Long story short – I had to bust out an old, half-empty box of Bran Flakes, a mere Plan C breakfast. 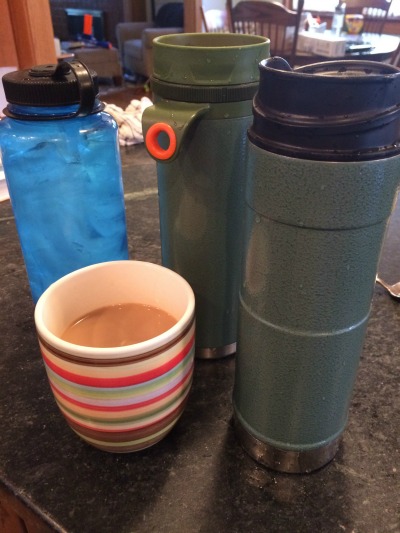 I’m still brewing 6-7 cups in the morning and transporting it in two Stanley thermoses to work (whatever doesn’t fit, I drink before heading out the door). I also sometimes grab an extra cup with co-workers late in the morning, but today was not one of those days. Oh, and I also try to drink all of that water too, packed like the Arctic Ocean with ice. 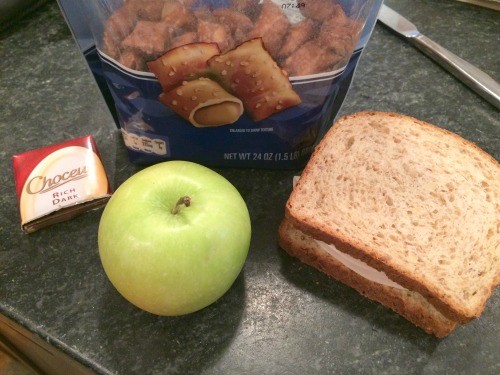 For today’s sandwich, I unearthed some turkey buried at the bottom of the fridge’s deli drawer. Sally, our household food safety officer, said “I wouldn’t eat it, but you do what you want.” Well, I’m happy to report that it was delicious, and I feel fine. I also had my usual granny smith apple, some peanut butter-filled pretzels, and half a bar of that awesome Aldi dark chocolate I wrote about last time.

We had an appointment immediately after work that derailed the usual family dinner routine. To make matters worse, the meeting ran long and I hadn’t had any kind of snack to tide me over. Midway through the meeting, in order to conserve dwindling energy resources in the face of imminent starvation, I could feel my body, mind, and mood shut down as I began the transformation into HANGRY MAN.

The meeting finally finished, I suggested we go to a nearby restaurant (Pies & Pints) for dinner. I wanted to drive 90 mph to get to the food as quickly as possible, but I couldn’t because I had to safely guide our two-vehicle caravan.

When you’re hangry, the world is a different, darker place. The peppy, cheerful waitstaff are annoying and slow. A five-minute wait for a table feels like five years. The hand dryer in the men’s room sounds as brain-numbingly loud as a jet engine (and it takes the dude in front of you at least an hour to finish drying his stupid, oversized hands). You snap at the kids to be still and growl your order to the waitress without joy. There is no time for friendly chit-chat.

Then, eventually, the food arrives. 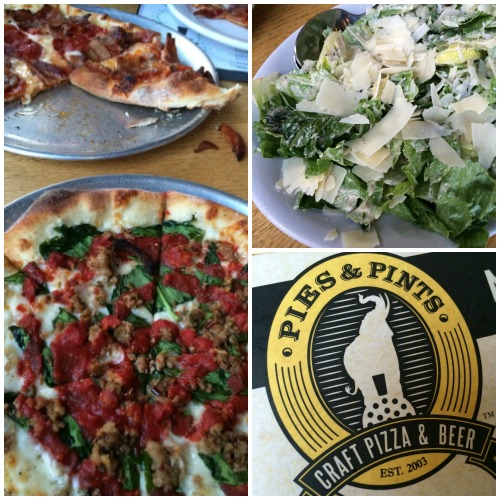 I inhaled my half of a gigantic Caesar salad in about five seconds and then tapped my foot impatiently until the pizzas arrived – sausage/spinich on one, pepperoni/bacon on the other. I probably could’ve eaten both pies myself, but graciously shared the food with Sally and the boys. There were no leftovers. 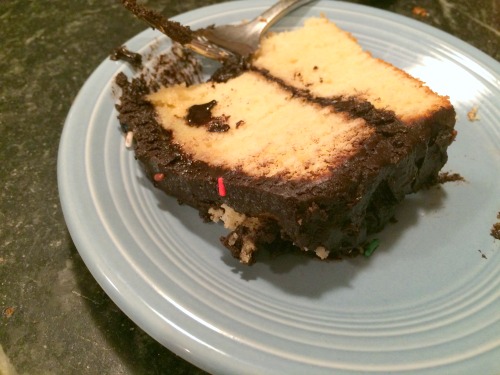 It was Sally’s birthday last week, and I had a piece of leftover cake later in the evening, after the boys had gone to bed and I could enjoy it without interruption. This particularly sturdy recipe dates to 2008, the year that Sally was pregnant and had the flu on her birthday, and I somehow navigated her cookbooks and found a recipe for yellow cake and chocolate frosting that the whole family still enjoys (the frosting is now known as “Daddy’s Famous Frosting”).

What does a dietitian’s husband eat? Find out in What We Ate Wednesday

How Feeding A Tween Is Easier
Next Post:The 7 Blog Recipes I Make The Most