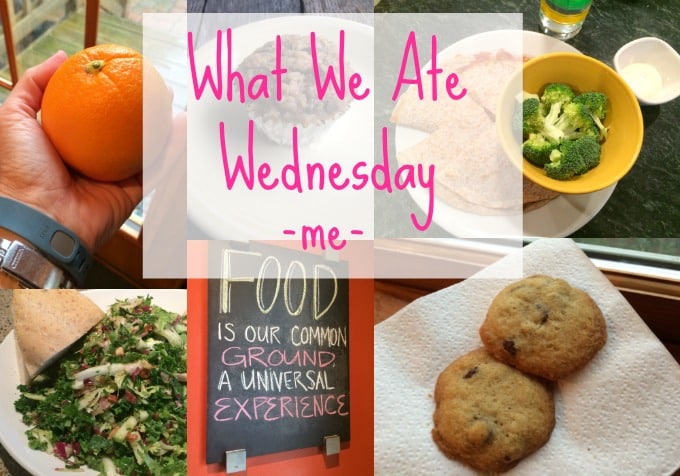 Those of you who’ve been following this new feature, What We Ate Wednesday, may have noticed the radio silence last week. That’s because I was sick for much of last week and wasn’t up for snapping photos of the glasses of ginger ale I was drinking while laying on the couch. But after many naps and some good meds, we’re back on schedule! 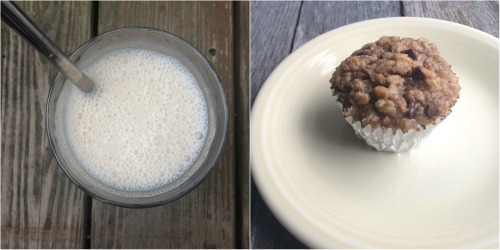 I am not a big breakfast person and usually just have some kind of smoothie mid-morning. Lately, I’ve been making this one: A cup of unsweetened almond milk + a frozen banana + a spoonful of natural peanut butter. I drank half of it before an exercise class and the rest when I got back. I also ate one of my Peanut Butter Chocolate Oatmeal Cups. It may look small but it’s very filling.

I met a friend at a favorite local place, Northstar Cafe, and ordered their massive Chopped Salad which is loaded with smoked turkey, almonds, apples, blue cheese, bacon and a vinaigrette that’s so yummy I think I could drink it straight-up. I ate almost the whole salad but left the hunk of bread behind. Eating bread or pasta at lunch makes me want to fall into a deeeeep sleeeeep…zzzz…

For most of the day I thought it was Wednesday and that we were having friends over for dinner. I had the menu planned and the pie crusts made. Then at some point I realized it was actually Tuesday–and that we had NO dinner plan. I peeled and ate this orange while I pondered our meager options. I wish I could dazzle you with a photo of an impressive, home-cooked meal. But I had to quickly pull together a random assortment of dinners from what we happened to have on hand. My husband, who came home sick from work, had leftover soup. My kids ate homemade meatballs from a freezer stash along with whole wheat pasta. I had a quesadilla made with whole wheat tortillas, homemade refried beans leftover from weekend taco night, and cheese. I threw some raw broccoli on the side and dipped it in ranch dressing. I ate all the broccoli and half the quesadilla.

For dessert I had two little chocolate chips cookies from a batch my sixth grader made (almost) by himself! Later, I had another orange.

Not the most exciting What We Ate Wednesday–but hey, that’s real life! To see more of what we eat around here, read:

5 Healthy Apple Recipes
Next Post:What We Ate Wednesday: Starring Me