What We Ate Wednesday: Starring My Husband

Well, hello. Joel here (Sally’s husband). She’s asked me to document everything I eat for one day. I’ll warn you upfront – I tend to be long-winded. But I also promise you this – you will be SHAKEN TO YOUR APPLE CORE when you find out what a “real dad” eats on a typical Tuesday!

Like Sally, I’m a recovering picky eater and I’ve made it a goal, especially since our boys came along, to be more aware of the good and bad eating habits I may pass down to the next generation. Sally generally takes the lead on food matters for the household, and my role is to be supportive of whatever new recipe or household challenge she introduces, which means being open to new things, no grumbling in front of the boys, and no undermining the household “food rules” when Sal’s not around.

Also, as I get older, I’m attempting to be better about both the quality and quantity of food I’m shoving in my gullet. I come from a family of big-eating men, so I find it difficult to leave any amount of leftover food on my plate (or on the stove) after dinner.

In short, I’m a work in progress. Also, food in general… just really isn’t my thing. When we eat out, I usually pick the closest thing I can find to “fried chicken with side of starch.” I coast along for years in food ruts without really noticing. But enough about me, let’s talk about MY FOOD. 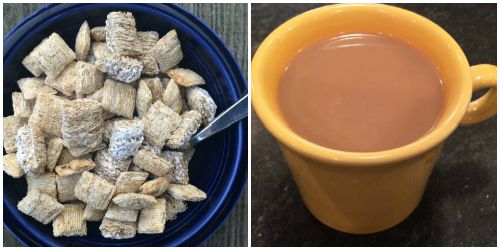 Cereal is my breakfast of choice these days. For the past year or two I’ve eaten a metric ton or so of this homemade granola. But a few weeks ago I hit my wall and decided to switch back to some boxed brands until my granola hankering returns. I had a bowl of the Frosted Mini Wheats my father-in-law gifted us (Sally would like me to mention that it’s higher in sugar than the cereals she buys), mixed with some plain shredded wheat because I’m generally trying to cut back on sugar. 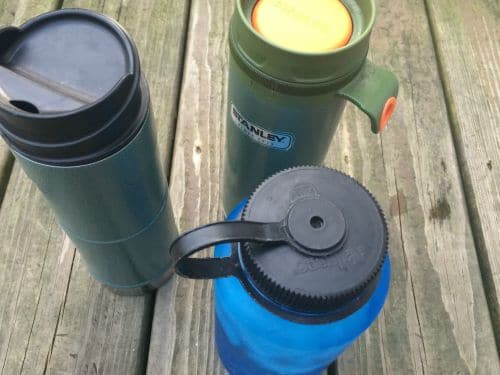 For many years, I drank an entire pot (12 cups) of coffee a day. A couple of years ago, my blood pressure started climbing. My doctor told me that his general rule of thumb is this: If you drink more than three cups of caffeinated coffee per day, it will most likely have some measurable effect on your body.  So I weaned myself down to 6 cups a day (mixing half regular and half decaf), which I transport in two Stanley thermoses (thermi?)… and which I *occasionally* supplement with a small cup from a local coffee shop.  But I didn’t do that today, so no need to tell Sally! In trying to cut back on sugar, I only put milk in my coffee. The blue bottle is ice water, which I also take to work every day as part of my strategy to drink less coffee. 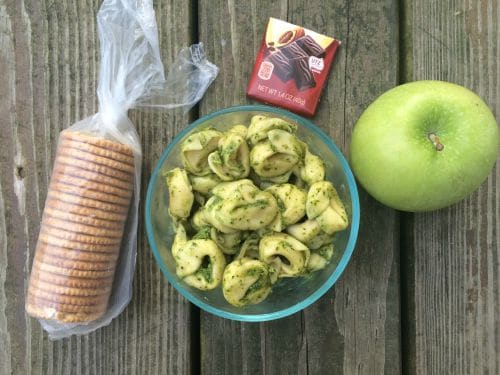 I’ve been packing my own lunch for years and eating it at my desk, which is antisocial but usually more nutritious and less expensive than when I venture out to eat with co-workers or a friend (which happens once a month or so). Sally offered to make some pesto tortellini for me to take in my lunch. But then I realized… hey – WAIT A MINUTE!  Sally KNEW I would be tracking what I ate today and was pushing the tortellini so she could give her new recipe for Lunchbox Pesto Tortellini another FREE PLUG. Very sneaky… and delicious! I also had one Granny Smith apple (my favorite variety), half a sleeve of crackers Sally got at Aldi, and finally, and half a small bar of Aldi dark chocolate, which is honestly the best dark chocolate I’ve ever had. 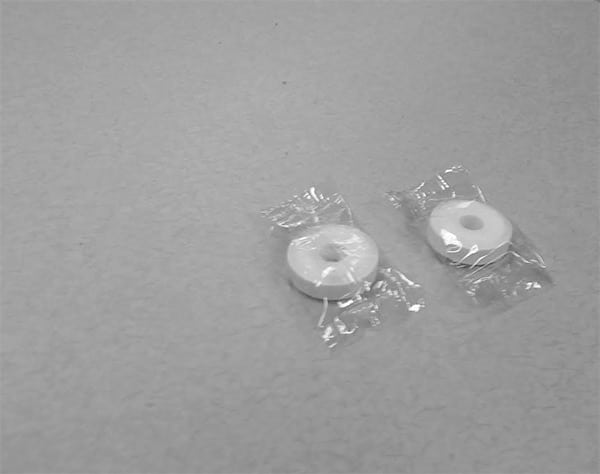 Working in an office can be dangerous. When well-meaning co-workers aren’t offering me donuts, birthday cake, an extra boxed lunch, a “brookie” the size of my hand, or an entire unopened large pizza (usually leftover from a meeting or office celebration), they’re keeping bowlfuls of candy, chocolates, and mints front and center on their desks. So I had two Pep-O-Mints. Big whup.
[Tweet “What does a dietitian’s husband eat? Find out in What We Ate Wednesday:”] 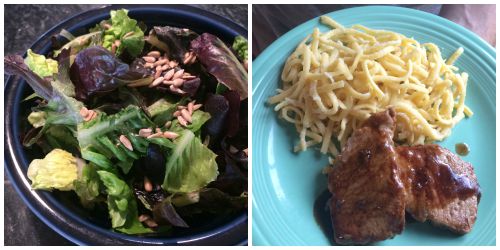 Dinner is my favorite meal, because I usually don’t snack at work and I’m downright “hangry” by the time I get home. Growing up, I refused to eat any green vegetables (embarrassingly, this was my defining characteristic, according to my German exchange host mother) but Sally gradually coached/goaded me into eating salad. Now, I gladly eat a decent-sized salad pretty much every night. Sometimes I even order it in restaurants! I sprinkled some sunflower seeds on it and used Sally’s homemade vinaigrette.

Also – meat and starch! Delicious honey-glazed pork chops and spaetzle. I could have eaten double the amount shown in the photo. I had a second helping of spaetzle and half of Sally’s pork chop that she didn’t finish. If we have beer in the house, I’ll usually have one with dinner. But we didn’t tonight, so I just drank water. 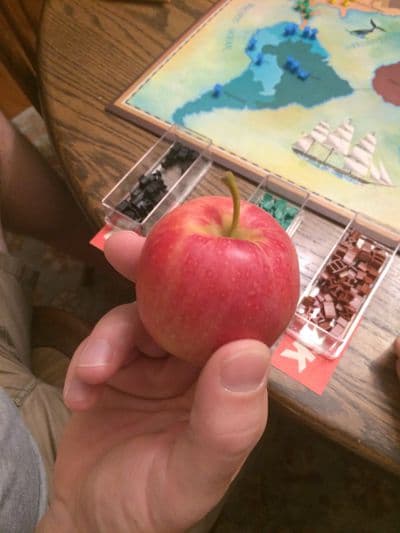 A Gala apple that Sally handed to me. I ate this while playing Risk with our 7-year-old, who currently controls South America.

Disclosures: Sally is a member of the ALDI Advisory Council but was not compensated for mentioning ALDI in this post.