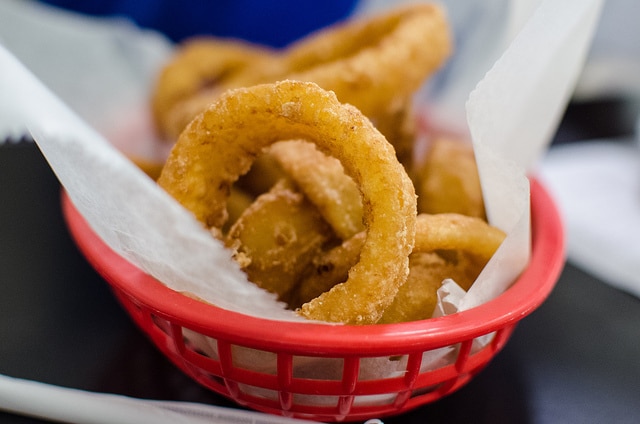 I got a wake-up call about feeding kids last weekend–in (of all places) a gas station food-mart.

I was traveling with my husband and kids, returning from a weekend visiting relatives. We stopped to fill up the minivan with gas and went inside the food-mart to order sandwiches for dinner (not ideal, but it works). My first grader asked if he could order onion rings with his sandwich.

Images of him regularly picking tiny pieces of onion out of his dinner flashed through my mind. Did he know there were actual onions inside those rings–big, slippery pieces much more threatening and offensive than those wee dices he surgically removes? Besides, I vaguely remembered him trying onion rings in the past and not liking them. I reminded him of this. My other son chimed in and said he didn’t like them either. I was feeling tired and impatient and not in the mood to waste money. I said no.

Then it hit me: Was I actually discouraging my child from trying a new food, one he’d rejected in the past (and in other forms)? Why was I telling my son that he didn’t like a food–when clearly he wanted to try it again? Wasn’t my goal to have open-minded, adventurous eaters? Sure, onion rings are greasy and deep fried, but they’re a new flavor, a new texture, and a new experience. (And not for nothing, but there is a big ol’ vegetable on the inside.)

So I reversed course. I apologized for being short with him. I said I was glad he wanted to try something new and that yes, he could get a small order of onion rings.

I watched him take his first bite. Just as I thought, a long piece of onion came sliding out of the crispy breading. He took it in his hands and gave it a look. Then he ate it. And ate another onion ring from the bag. He told me the onion inside tasted better on its own than inside the breading. I informed him that onions were actually those things he picks off the top of his pierogies. He looked at me like I was crazy.

And my older son (the one who claimed he didn’t like them)? He asked for one, took a bite, said “Mmm!” and suggested we get a bigger order next time.

For me, the moral of the story is this: My kids will change their minds. Their tastes will change. They’ll always surprise me. And they should be given the chance to try foods–and then try them again. Even if they’re greasy onion rings.