Is Cereal Healthy For Kids? Here Are The Facts!

Wondering whether cereal is good for kids? Here are the facts about cereal and sugar, pesticides, and more!

If you routinely dug into bowls of cereal as a child but have been wondering lately if it’s a good choice for your OWN kids, this post is for you.

Because while cereal remains the most-eaten breakfast food at home, cereal sales have been going down (thoughthey’ve seen a boost lately). There are headlines about pesticides and preservatives and concerns about eating packaged foods in general.

So I wanted to tackle those topics one by one and get answers for you.

I personally love cereal. I grew up eating it, and we have a rotation of 3-5 boxes in our pantry. But here are the facts so you can make your own choices! 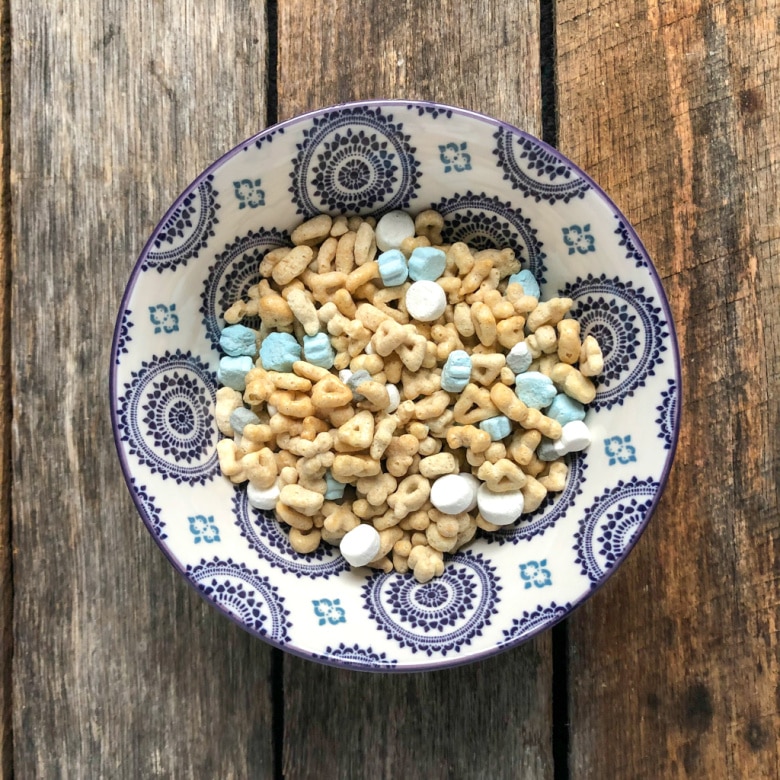 You’ve heard: Kids get a ton of sugar from cereal.

It’s easy to point the finger at cereal as a major source of sugar for kids–especially the ones shaped like cookies or named after candy bars. But is that actually true?

Cereal does contribute sugar to kids’ diets, but maybe not as much as you think. In a study published in the Journal of the American Dietetic Association, cereal was the fifth highest source of added sugar for 2-8 year olds, contributing about 1-2 teaspoons of added sugar per day. Cereal did not make the top-five list for all kids ages 2-18.

In another study in Nutrients, researchers compared kids who regularly eat cereal with those who don’t. They found that cereal eaters don’t get significantly more added sugar (or sodium) per day, and they consume more nutrients like fiber, calcium, iron, and B vitamins. They also have a 61 percent higher intake of whole grains. (Full disclosure: The second study was funded by General Mills. A lot of research about cereal is done by the cereal industry–which is true of many industries that have a vested interest in examining a particular topic.)

CONSIDER THIS: Cereal manufacturers have cut the sugar content in their cereals over the years. Kellogg’s and General Mills have both reduced sugar in their kids’ cereals. (One way they’ve done this is to put sugar on the outside of the cereal piece–and reduce it inside–so the sweet flavor hits the taste buds quickly but the piece contains less sugar overall.)

There’s also a school of thought around added sugar that emphasizes the company that sugar keeps. For instance, cereal, flavored milk, and flavored yogurt all contain added sugar but are also nutrient-rich.

If you like the idea of cereal but feel iffy about the sugar content, here’s a big list of lower-sugar cereals. (Also, scroll to the bottom of the post for more ideas on reducing sugar intake from cereal.)

Don’t think your kids will eat cereal that’s not super-sweet? They might! In a study from Yale University (not funded by a cereal company), kids were offered low-sugar and high-sugar cereals on alternating days. They reported liking (and even loving) both kinds. When served the low-sugar cereal, they were more likely to add fruit to their bowls. Even when they added sugar on top of the low-sugar cereal, they still took in less sugar (about a teaspoon) than they did when they ate the sweeter types. 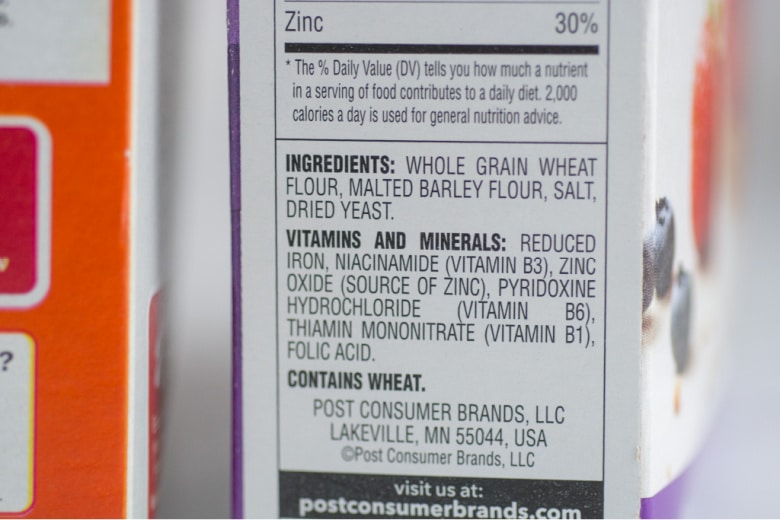 You’ve heard: The vitamins and minerals added to cereal aren’t good for you.

That study I just mentioned about cereal-eating kids getting more of certain nutrients? It’s likely because many cereals are fortified, which means they have vitamins and minerals added to them.

Cereal is the top source of certain nutrients including folate, iron, zinc, vitamin A and E, and some B vitamins for U.S. kids and adults, according to government data.

You can tell if a cereal is fortified because any vitamins and minerals added will appear in the ingredients list. Keep in mind that some brands of cereal aren’t fortified, including ones labeled “natural”.

But some say the fortification is unnecessary and even unhealthy. A report from the Environmental Working Group (EWG) claims that kids are at risk for getting too much vitamin A, niacin, and zinc from fortified cereals.

CONSIDER THIS: You should know a few things about the report. The cereals they flag as being excessively fortified are largely ones geared toward adults (like bran flakes and wheat bran). Some of their argument is also based on young children (ages 4-8) eating 2-3 servings of cereal per day–which seems like an awful lot for a young child.

One thing they do call out in the report is the risk for kids who are already taking supplements, and that’s important to consider. Many picky eaters could use the boost from fortified cereal. But if your child already takes a multi, it may be overkill. (You should always talk to your child’s pediatrician or dietitian about whether they recommend supplements–but keep in mind that kids who eat a fairly healthy, varied diet may not need a multi.)

Cereal fortification has also changed over time. For instance, General Mills now fortifies their cereals with lower amounts of B vitamins and more vitamin D to align with current intakes of those nutrients.

You’ve heard: There are too many pesticides on cereal.

There have been a lot of headlines about glyphosate, the active ingredient in Roundup, the most widely used weed-killer in the U.S. EWG released a report claiming that many oat-based cereals contained what they call unsafe levels of glyphosate.

CONSIDER THIS: The safety threshold EWG established is far lower than the Environmental Protection Agency’s benchmark. And even though glyphosate is classified by the World Health Organization’s International Agency for Research on Cancer as “probably carcinogenic” (cancer-causing) to people, both the EPA and National Institutes of Health disagree. According to the National Pesticide Information Center, studies on glyphosate and cancer rates in people are conflicting.

Before tossing out your boxes, here’s some perspective. Based on EWG’s safety limits, they estimate a cancer risk of one in a million from eating .01 milligrams of glyphosate a day (what you’d get from eating two cups of cereal every day).

Even EWG says, “We don’t think people should go to their pantries and toss out all of the cereal, oatmeal and other oat-based foods found there. Any risk from pesticide residues on food is from long-term exposure.” So as a dietitian, I apply the same advice here as I would with reports about arsenic in rice: Variety is key.

Oats and oat-based cereals are nutritious in many ways. So vary the kinds of cereal you buy and eat (and the kinds of breakfasts you serve) to diversify the nutrients you get and limit your exposure of anything you wouldn’t want to get in excess amounts.

(Also, it’s important to note that EWG is a controversial organization. While some people follow their advice to the letter, others say the group uses bad science and creates worry to promote organic food.) 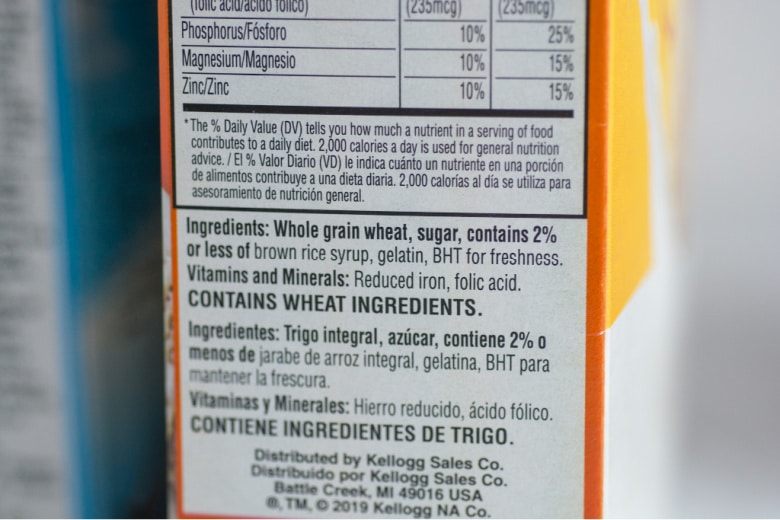 Many breakfast cereals include a preservative for freshness, either in the cereal itself or in the packaging. It helps prevent fats in the cereal from going rancid and keeps the cereal fresher longer.

One preservative used in cereals is BHT (butylated hydroxytoluene). Some animal studies show it ups cancer risk. The Center for Science in the Public Interest puts BHT in its “caution” category on their food additives list.

CONSIDER THIS: Some research on animals finds it lowers cancer risk because it acts like an antioxidant.

Cereal companies have nixed BHT from some of their cereals because of consumer feedback, so you can find varieties without it. And some cereals use vitamin E as a preservative instead, which you may see listed as “mixed tocopherols”.

You’ve heard: Cereal is too processed.

“Processed” is a pretty vague term. Fruit Roll-Ups are processed. But so are home-canned garden green beans. I think the term “ultra-processed” is more helpful when talking about food.

So is cereal ultra-processed? Some cereals (like those little chocolate-chip cookie shapes!) are more processed than others (like plain shredded wheat). Some cereals have just a few simple ingredients.

CONSIDER THIS: Personally, I don’t think it’s realistic to ban all processed (or even ultra-processed) foods from your diet. I focus on getting whole and fresh foods and don’t worry about occasional ultra-processed foods. For me, it’s what I eat and feed my family most often that counts.

Should you give your kid cereal?

Cereal is an easy and affordable breakfast (a bowl of cereal with milk costs on average 50 cents per serving) and some research shows it’s particularly helpful for supplying important nutrients to people in lower-income brackets.

If you choose not to eat it or feed it to your kids, that’s fine. But there’s no need to demonize cereal or shame others for eating it.

So what are the best cereals for kids? I’m all for occasional “treat” cereals–especially for vacation! But what about cereals you stock for everyday? If you’re feeling overwhelmed by the cereal aisle, here’s the rough criteria I use when comparing boxes:

1. Single digit grams of sugar per serving: Ideally, I look for cereal with 5-7 grams or less. If you can’t find a lower-sugar cereal your kids like, consider two options:

2. No artificial colors: Some cereals are colored with synthetic dyes (such as Yellow 5 and Blue 1)–even cereals that aren’t brightly colored. In a study published in Clinical Pediatrics, researchers from Purdue University measured the amount of synthetic food dye in foods and drinks commonly consumed by kids and found amounts in several cereals (including Trix and Cap’n Crunch) higher than amounts shown in other research to impact behavior in some children.

Though the research is mixed (and I don’t stress about an occasional birthday party cupcake or ice cream cones), I avoid synthetic dyes when possible for the foods I buy regularly. Many products now use natural colors, so it’s not hard to find a cereal without dyes.

3. No artificial sweeteners: To decrease the sugar content of cereal, some manufacturers are adding low-calorie or no-calorie sweeteners. I’m personally not a fan of the flavor of these sweeteners–and would prefer to have a less-sweet cereal or sweeten it myself. If you’d want to avoid those sweeteners too, look out for ingredients like sucralose and acesulfame potassium.

4. Whole grains: Cereal is such an easy way to get whole grains. Look for the word “whole” in the first ingredient, like whole oat or whole wheat or a whole grain like brown rice.

5. Fiber: Most kids don’t get enough, and many cereals are a good source. It also makes a bowl of cereal more filling and helps keep kids regular. I look for cereals with at least 3-5 grams of fiber per serving.