Why I’m Still Not Lovin’ McDonald’s

One year ago this month, I traveled to McDonald’s corporate headquarters in Illinois to help deliver the message that parents are tired of fast food marketing to children. I was part of a team of mothers organized by Corporate Accountability International (CAI). Though McDonald’s tried very hard to silence our message at the shareholders’ meeting, I was able to stand at the microphone and deliver a statement to the CEO and a room full of McDonald’s supporters (read my statement here). It was nerve-wracking for sure–but also empowering to voice those concerns directly to the CEO and to everyone watching and listening. 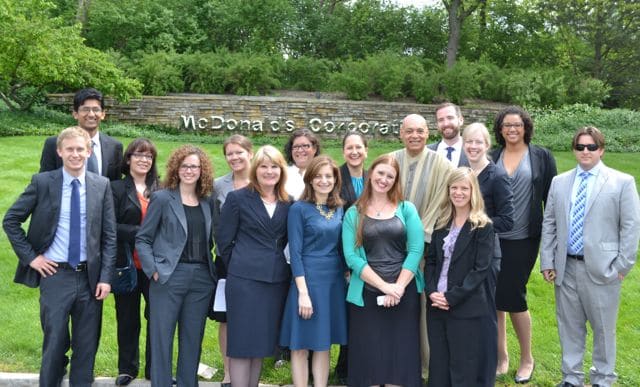 The good news is that the tide is turning. Consider what’s happened in the last year:

The one positive development–their announcement that by 2017, their U.S. restaurants will not serve chicken given antibiotics important to human medicine–is a step in the right direction, but not nearly enough.

McDonald’s earns their profits from burgers, soda, and other unhealthy food. And they continue to market directly to children, including at school. Though the CEO assured me at last year’s meeting that they “don’t put Ronald out in schools”, their U.S. president told franchise owners that they’ve “got to be in schools“. Ronald continued to make appearances for students across the country.

This Mother’s Day, let’s send a message to McDonald’s new CEO, Steve Easterbrook. Let’s ask him to give moms the gift that’s been years in the making. Send this letter to Mr. Easterbrook, asking him stay out of our children’s schools and retire Ronald McDonald once and for all.

What To Do About Junk Food Sports Snacks
Next Post: Double Chocolate Granola