Why I’m No Fan of Sports Drinks 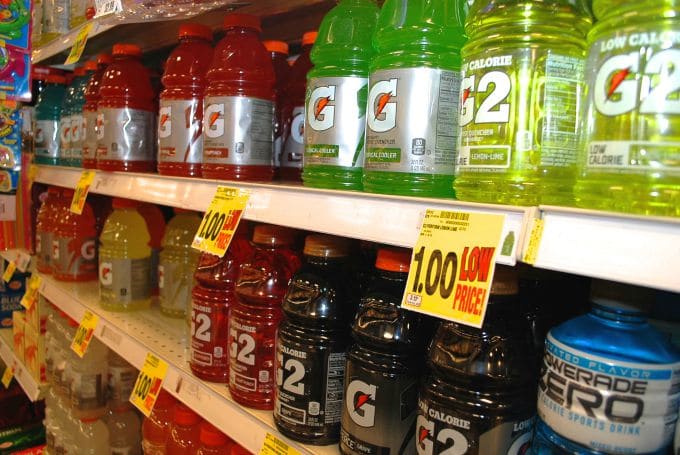 The longer I am a parent, the more irritated I become about sports drinks.

I am irritated that million-dollar marketing tactics are used to woo children with star athletes, logos splashed all over televised sporting events, and online comics and games. It’s wrong.

How wrong? Last year, Gatorade actually developed a video game in which the player maneuvers around a course, gathering up Gatorade and avoiding water–the “enemy” that would slow him down. (Read “Water is the enemy, Gatorade Mobile Tells Youth” on Civil Eats and this follow-up on The Lunch Tray that includes action you can take if you’re disgusted too.)

The marketing has also confused and misled parents, many of whom believe that sports drinks are not only good for kids but also necessary for any kind of sporting event, even pee-wee soccer games that barely last 45 minutes or baseball games that involve more sitting and waiting than running and sweating.

What most kids need for sports is water and good food. In their 2011 clinical report, the American Academy of Pediatrics (AAP) said that water is “the appropriate first choice for hydration before, during, and after most exercise regimens”. For garden-variety sports practices and games, electrolytes lost through sweat can be replaced with the next snack or meal. According to the AAP report, “For most children and adolescents, daily electrolyte requirements are met sufficiently by a healthy balanced diet; therefore, sports drinks offer little to no advantage over plain water.”

What most kids don’t need: The ingredients in sports drinks.

I know sports drinks taste good to kids, including my own kids. And I’ve let them have sports drinks on rare occasions (read “Why I’m Glad I Bought the Gatorade“). But lately, we’ve also been talking about the marketing tricks, the massive paychecks given to athletes, the huge sums paid to the NFL for placing Gatorade coolers, towels, and water bottles all over the sidelines.

We’re also talking about how sports drinks won’t make them faster on the soccer field or better able to catch passes in flag football, regardless of what they see on billboards and in commercials–that unless they’re playing sports for a very long time in very hot and humid weather, plain water is perfect. And that sports drinks are no better than soda, fruit punch, or any other sugary drink they see in vending machines.

I also lobby for sports team snack policies that include water–only water. If you’d like to see sports drinks gone from the sidelines of your child’s games too, check out my Sports Snacktivism Handbook for resources on making change happen.