Why I’m Glad I Bought The Gatorade 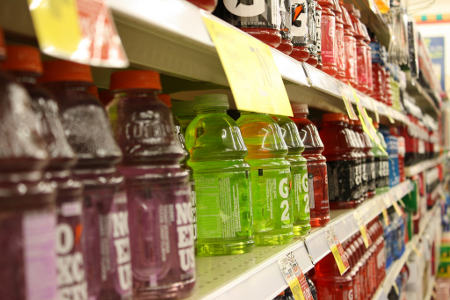 It was a case of poor planning. My husband and I had taken our nine year old, Henry, to an outdoor center to play mini golf and hit balls at the batting cages. It was steamy hot, and while I had remembered the hats and sunscreen, I had forgotten water. There were no water fountains, and the vending machines were completely sold out of bottled water. All that was left was Gatorade. Henry really wanted Gatorade.

I am no fan of sports drinks (read: “On the Front Lines of Snack-tivism“). My son knows that, and he knows why. But I looked at his flushed face and knew he needed some hydration. We could’ve gotten into the car and driven somewhere to find water. But we were hot and tired. We bought him the Gatorade.

He drank the whole bottle–all 2.5 servings. When we arrived home, he flopped down on the couch holding his belly. “I feel sick,” Henry said. “I think it was the Gatorade.”

“You should write on your blog about how Gatorade can give you a stomachache,” he said.

Of course I had sympathy for him (thankfully, he felt better after resting a bit). But I liked two things about this moment:

1. That my nine year old is looking out for blog ideas for me.

2. That he had this experience. Because he learned something from it. He learned that water is the best thing to drink when he’s hot and sweaty and that sugary drinks on an empty stomach (and a dehydrated body) can makes him feel kinda gross.

I’m not naive enough to think this will nix Henry’s love of colorful, sugary drinks. I’m sure he will ask for sports drinks again, and I’m sure he still thinks they’re cool (thanks for that, athletes and rock stars who promote them!). But he’s also experienced firsthand that there’s a not-so-great side of sugary drinks too. If I’d driven those 10 minutes out of our way to get water, he wouldn’t have had that experience. And it’s one that (just maybe) he’ll remember the next time he’s faced with the choice.

In my opinion, that’s much more valuable than any lecture I could give him about sugar or artificial dyes.

It’s one reason I don’t shield my kids from junk food (read: “My kid likes junk food. And that’s okay.”): So they’ll know what it’s really like–the good, the bad, and the bellyaches.

Everyone Loves This Vinaigrette Dressing
Next Post:Lunchbox Oatmeal Bars