Should We Get Rid of Soccer Snacks? 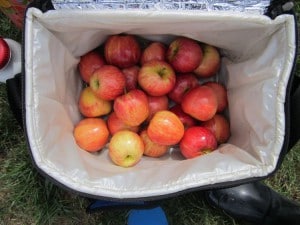 I may be Mom on a Mission. Even Soccer Mom Gone Wild. But I am not Orange Slice Mom.

In a hilarious piece on the Huffington Post, mom and senior writer Ann Brenoff says she’s tired of the tryannical Orange Slice Moms and their demands for certified organic fruit and gluten-free snacks bars.

Snacks, by definition, are supposed to be a treat. But instead of regarding them as such, a competition has arisen among mothers to best the previous week’s snack mom. If she brought $20 worth of organic grapes (in addition to the oranges, filtered waters and gluten-free power bars that taste like cardboard), this week’s snack mom will do all that plus watermelon slices and healthy gummy bears.

Orange Slice Mom sounds an awful lot like Organic Mom. And let’s face it, she can be a little high-maintenance.

I’ve said many times that kids don’t really need snacks after soccer. Around here, games last an hour, tops. And most people in my community live about five minutes away from the soccer fields. Post-game snacks could be eliminated entirely and no player would ever fall over from starvation. Even better, nobody would need to coordinate a snack schedule or make an extra trip to the store because they forgot it was their turn.

On my son’s last two teams, parents took a vote at the beginning of the season: fresh fruit or no snack. In both cases, parents voted for fruit. Some say they enjoy the ritual of sharing food together as a team. Many appreciate the extra exposure their child gets to fresh fruit–and the positive peer pressure to try some. (I say, I’m fine either way.)

But sometimes, parents can’t agree on what the snack should be. Though I’ve been lucky to have coaches and parents on my son’s teams who supported bringing fruit, other well-intentioned moms have run up against disagreement and downright hostility. In those cases, a no-snack policy is smart. Let each parent decide what’s best for their child and call it a day.

But for Heaven’s sake, let’s not go overboard with healthy snacks. Asking parents to supply only organic fruit isn’t fair or feasible. Yes, we’ve had parents who wanted to do something special–like fruit kebabs or grapes in sticker-adorned bags. The kids loved it. But I also try to set an example early in the season of simply bringing bananas or a cooler full of apples so parents know that they don’t have to spend a lot of time or money.

As much as I enjoyed Brenoff’s post, I do disagree with this: “By definition, snacks are supposed to be a treat.” Actually, snacks have become treats. And if research is right and kids are snacking three times a day, that’s the real problem.