What Are The Olympics Teaching Your Kids About Food? 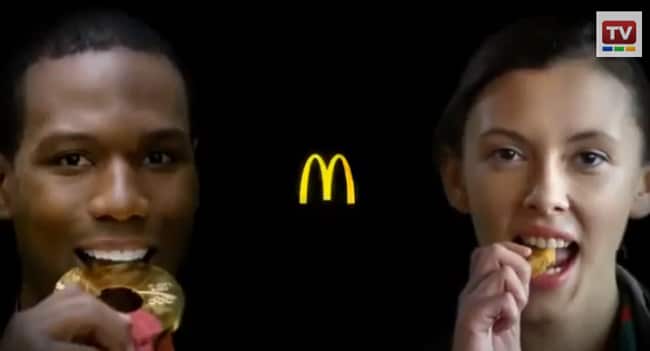 That’s what my nine year old said to me as we were watching the Olympics the other night. That’s because every 10 minutes that McDonald’s commercial was on the screen. You know which one I’m talking about: the split-screen showing an Olympian biting their gold medal on one side and a person biting their Chicken McNugget on the other.

At first, I wondered: What’s the message of this ad? That if you eat enough Chicken McNuggets you’ll become a Olympian? That taking a bite of fast food is somehow as thrilling as receiving the highest athletic honor awarded on an international stage? Then I found out that the TV spot is called “Celebrate With a Bite”. So apparently, we’re supposed to celebrate someone else’s athletic achievement by eating a lump of processed chicken? I’m still confused.

A grown-up can see the silliness of this ad. A child? Maybe not.

That’s why I’m doing some deprogramming while we watch the speed skaters and snowboarders. Because while I love a lot of what the Olympics teach my kids–that hard work pays off no matter what your goal, that you can overcome challenges and setbacks, that there’s much to learn about other countries and cultures–I don’t love the messages they’re getting from most of the food advertising.

Here’s what I’m teaching them instead:

I want my kids to get the counter-message to all these commercials and become savvy enough to see through the glitz and fun that millions of ad dollars can buy. They’re capable of understanding these concepts. And hopefully if they understand those concepts, they won’t come to associate being cool and having fun with eating McDonald’s and drinking Coke. They’ll see it for what it is: People trying to make a lot of money.

How disappointing that athletes–including Olympic athletes–so often endorse junk food. An incredible 79 percent of the foods and drinks athletes endorse are high-calorie, low-nutrient foods like Oreos, McDonald’s, and Mountain Dew, according to a study last year. Wouldn’t it be nice if, instead, they endorsed products that were in line with the kind of healthy lifestyle they themselves are presumably living–the kinds of lifestyles we want our kids to be living too?

Wouldn’t it be nice if fruits and vegetables were, like, the official foods of everything?

I wrote this post as part of the Olympic Moms campaign, which encourages families to use the Olympics as an inspiration for better health, fitness, and family fun. Download the free Participant Guide for ideas, expert advice, and recipes.