The Reality of Cooking With Kids 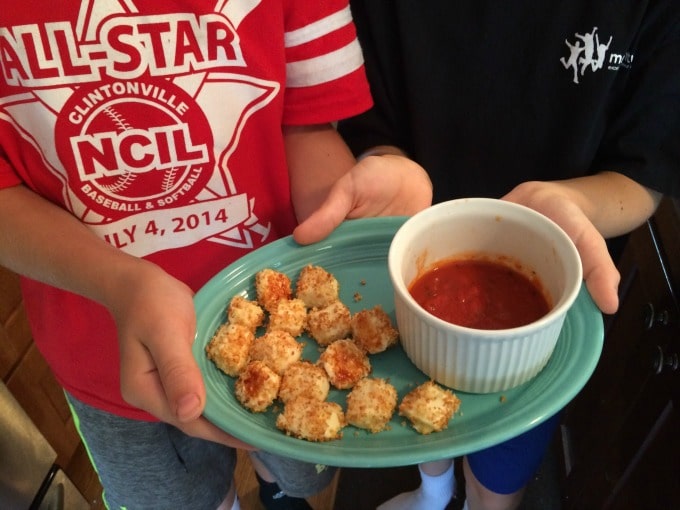 When people find out I’m a dietitian and write a blog about feeding kids, it’s only a matter of time before they ask: “Do your kids cook with you?”

I cringe a little bit every time the question is asked. Because the answer isn’t a rosy, filtered Instagram moment. The answer is no, not really.

The truth is that neither one of my boys has expressed much interest in cooking. They enjoy helping me bake, but that’s because they know I’ll let them lick the spoon if they stick around long enough. The fact that I blog about feeding kids, spend a lot of time in the kitchen creating new recipes, and even collaborated with Cooking Light on a cookbook

hasn’t sparked much enthusiasm in their little spirits.

And can I blame them? They simply wait to be called to the table each night, where a plate of food is waiting for them. They’ve got it pretty good. Even worse, a few years ago I established the house rule that their daily allotted screen time occurred between 5-6pm so that I could make dinner in peace. So now nobody wants to give up Minecraft to stir spaghetti sauce (and to be honest, most nights I savor the alone time).

Yet I really want my boys to become Men Who Can Cook. They don’t have to turn into foodies, but I want them to leave the house with the basics: how to pan-fry some chicken cutlets, bake fish fillets, roast veggies, make a simple pasta dish, and use a chef’s knife.

When I’ve forced the issue, I’ve gotten mixed results. My older son took pride in learning how to make his own scrambled eggs in the morning, though he’d still prefer to flip through the latest issue of Lego magazine while I did it for him. My younger son is less enthused about learning to cook. Let’s recall this photo from last year (read: Cooking With Kids): 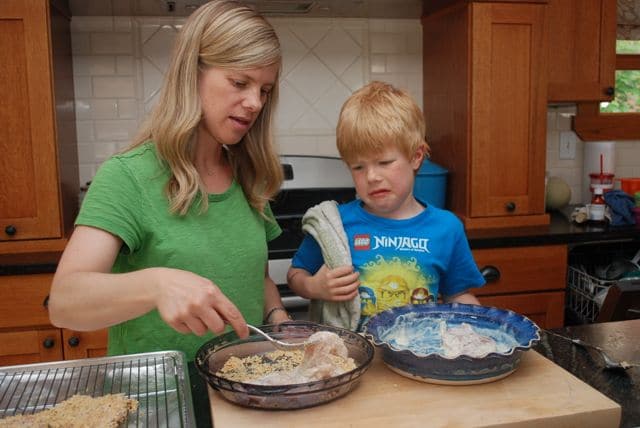 So I’ve sweetened the deal. By paying them. This summer I established a chore system. In addition to the “every day chores” that are done without reward (making your bed, clearing your dishes, not leaving your shoes in front of the door), there are optional “bonus chores” worth a quarter each: emptying the recycling, dusting–and yes, helping to cook (at ANY meal, so it doesn’t always compete with Minecraft). So far, they’ve only taken me up on it twice. But it’s progress. It’s a baby step toward them knowing how to make a decent meal.

Home cooking matters. I know this. I preach this. If your kids are into it, that’s wonderful. Keep posting photos on Facebook of your preschoolers with their soufflés and I will try very hard to contain my jealously. But if they aren’t, don’t beat yourself up. We’ve got time.

To prove this theory, the day after I wrote this post and saved it as a draft, my ten year old and his buddy decided to spontaneously make a recipe from my cookbook

(the baked mozzarella bites) on their own. They read the recipe, divided up the tasks, problem-solved, and needed almost no help (they did ask me to take the hot baking sheet out of the oven, which I was happy to do). It was a thing of beauty watching them work together and take pride in their work. And it gave me hope. My kids really will learn to cook someday. They just might like it too.

Disclosure: This page contains Amazon Affiliate links. If you purchase a product through these links, your cost will be the same but I will receive a small commission to help with operating costs of this blog. Thanks for your support!
Category: Family LifeTag: cooking with kids
Previous Post: What To Do When Your Child Feels Deprived Of Junk Food
Next Post:5 Common Problems at the Root of Extreme Picky Eating