The Mom I Can’t Be 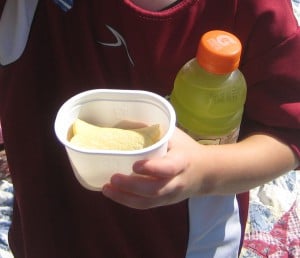 In my efforts to bring healthier snacks to the sidelines, I dubbed myself THAT Mom.

But there’s one mom I can’t be. It’s the one who, while all the kids are diving in to the donuts and Capri Sun after a game, pulls her child away and says “You can’t have that”.

I know some of you absolutely have to do this because of food allergies. I know some of you do this simply because you (understandably) don’t want your child eating this junk every week. And I know some of you will think I’m not walking the walk when I rail against junk food at sports games but would let my kid dig right on in.

But here’s what I worry about: I worry that excluding my kids that way–forbidding them to join the fray–is potentially more damaging than the hydrogenated fats and high fructose corn syrup.

Because I can talk to my children about the downsides of these foods all I want. But at the end of the day, they are 7 and 3. When someone opens a cooler full of Krispy Kremes and juice boxes and says “Have at it”, they want to.

If I say “You can’t have that”, here’s what they won’t be thinking: “She right, we just had breakfast an hour ago and that snack is loaded with calories and trans fat and artificial coloring that we don’t need.”

That’s why I want this stuff gone from the sidelines completely–so it’s not another battle parents have to fight, another treat we have to negotiate and somehow work in to the day, another snack that kids with food allergies will have to pass up.

And it’s why I bristle every time someone counters my fruit-and-water snack proposal with “If you don’t like the cupcakes and cookies, then don’t let your kid have them.”

Believe me, I already say “No” to an awful lot of  things. Because we live in a country where cheap, delicious-looking food is everywhere, I’m frequently saying “no”: to slushees at the gas station, to candy at the grocery aisle, to candy bars and sports drinks in vending machines.

I’ve heard a few moms say how proud they were when their child didn’t take the crappy snack after soccer games. And while it’s great that some kids can exercise that kind of restraint when presented with these foods, we can’t expect that of young children. Most adults, with decades’ worth of knowledge and experiences, can’t even do that. We’re setting them up for failure if we make junk available at every turn but hope they’ll use their better judgement.