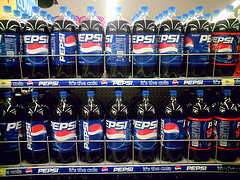 All of a sudden, Henry is full of tales about kids who brought Pepsi in their lunch to camp or drank Mountain Dew at their cousin’s birthday party. And he’s asking me questions like, “What does Sierra Mist taste like?” and “What’s the difference between 7-Up and Sprite?”

The only pop we have in the house are two dusty cans of ginger ale left over from a bout of stomach flu I had, so Henry’s generally clueless in the way of soft drinks. That’s by design of course. There’s a slew of research on the staggering amounts of sweet drinks kids are guzzling down today and the toll it’s taking on them (you can read about it here and here). Some say sweetened beverages, the number-one source of added sugar in kids’ diets, are an underlying cause of childhood obesity. When I see overweight kids tottering out of the convenience store with 296-ounce cups they need two hands to carry, I think of the Weeble-like citizens of the Axiom with their “cupcake in a cup” in WALL-E and tend to agree.

I had a permanent cherry Kool-Aid mustache from age four through twelve, and our refrigerator growing up held a rainbow assortment of Faygo cans. So I know that kids can drink this stuff and not become obese, nor suffer nutritionally. And I also know that pop—and sports drinks and energy drinks—will someday be a bigger part of my kids’ lives. When they’ve got their own money jingling in their pockets and no mom in sight, they’ll be chugging down cans of Coke with their buddies (and, because they’re boys, probably burping the alphabet to great howls of laughter).

But for now, I give them water and milk (and about once a week it’s chocolate). Every summer, I make a few pitchers of lemonade and buy Henry a blue-raspberry Icee during our annual trip to the amusement park. And this year, after much pleading on Henry’s part, I also let him pick out a six-pack of 12-ounce Gatorade bottles to take on our family beach vacation (more than a week later, two are still left). Above all, I try to teach my kids that sweetened drinks—just like cookies or candy or ice cream or cupcakes—are sweets, not drinks.

But maybe someday, when we’re visiting my parents in Pennsylvania, I’ll fix him a Cherikee Red ice cream float and really give him something to tell his friends about.