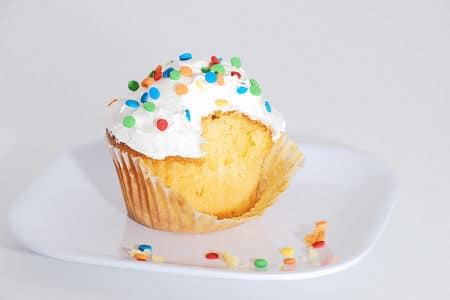 I was at a party recently with other families. It was a potluck, and the food was on a buffet. Someone had brought mini cupcakes and put them on the table along with the rest of the food. So when the kids went down the line with their paper plates, guess what they wanted?

Nobody let their child have a cupcake with dinner. Parents said “not right now” and “after you finish your chicken”. Except me. Yes, the lone dietitian in the group let her kids put a cupcake on their plates, along with chicken and fruit and carrots. My kids ate their mini cupcakes first then ate their other food and went off to play.

The other children continued to pester their parents about the cupcakes. They wanted to know: “When can I have one?” and “I took three bites. Can I have one now?” and “How about now?” The parents were, understandably, annoyed–at their kids for sure, and probably at me for being the mom who let her kids eat cupcakes with dinner.

A few years ago, I probably wouldn’t have let my kids have those cupcakes with dinner either. I would’ve asked them to eat their meal before moving on to dessert. They would’ve nagged me. They would’ve taken a few bites of their dinner, convinced me they were full–and then come back a few minutes later for dessert.

I learned a lot when Sam went on his dinner strike and I got some coaching from “food sociologist” Dina Rose, Ph.D. One of the lessons: If you’re cool with your kid having a cupcake, does it really matter if he eats it at breakfast or after dinner? (Read: “Cookies for Breakfast”.)

Logically, this makes sense. Putting it into practice is a little harder. When your child has a cupcake on his dinner plate at a party, it’s hard not to feel like you’re doing the wrong thing. But in this case, it was the right thing for my kids. Why?

Do I serve dessert with dinner at home? Not usually, though I have on occasion. There are also some nights when I simply say, “It’s not a dessert night” if asked about it by my kids.

But when faced with that situation–dessert on a party buffet–cupcakes with dinner made perfect sense to me.