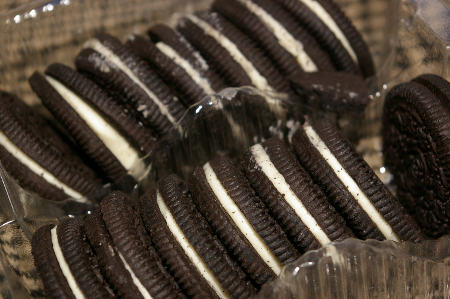 My mom tells a story about eating lunch at school as a little girl—and being embarrassed by the homemade cookies my grandma had packed for her. The rest of the kids had store-bought cookies. And even though my grandma’s cookies probably tasted 100 times better than those packaged treats, she wanted theirs instead.

I think about this story a lot because I occasionally live a version of it with my 8 year old: Like when he asks if he can pack a Lunchable like the other kids. Or when he suggests we get dinner at McDonald’s.

He gets a “no” (and an explanation) to those two particular requests. Don’t get me wrong, my kids have had junk food. They’ve not only had junk food, they actually like junk food. And I caught flak for admitting that. (Read: “My Kid Likes Junk Food. And That’s Okay.”)

Sure, a part of me wishes my children always felt the same way I do about packaged cookies and fast food. But when I was young, I distinctly remember thinking those mass-produced, heavily marketed foods were just really cool. Exactly like my mom did so many years ago.

That’s why it doesn’t bother me too much when my son makes these occasional requests. It doesn’t mean I give in to all of them. But it also doesn’t mean that I’ve somehow failed because he thinks the snack cake in his buddy’s lunchbox looks awesome. It does look awesome. It would probably taste awesome as well. (During my own childhood, I ate one nearly every day for about a decade.)

But guess what? My son’s favorite cookie is actually one I make myself. He loves the homemade breads and fruit pies I bake. He talks a big game about McDonald’s but happily eats my home-cooked dinners. And he gets excited when I bring fresh berries home from the farmer’s market. Children can think junk food is really cool (thanks to food marketers) and they can also love fresh, whole foods (thanks to you). In my book, there’s no shame in that.

My goal is to give my kids enough positive exposure to real, delicious food–and to talk to them about food marketing and the link between food and health too–that someday, they will be amazed that they ever preferred the Kraft blue box to their mom’s version.

And maybe they’ll tell that story to their own kids. Hopefully over bowls of homemade mac-n-cheese.