What Happened When I Went to McDonald’s HQ

I’m a realist. I know people eat fast food. I know many busy families eat fast food. You can tell me you spun through the drive-thru on your way home from soccer practice, and I won’t judge.

Here’s what I do judge: The way McDonald’s uses toys, clowns, mascots, schools, and athletes to directly market their food to children.

That’s why I joined Corporate Accountability International (CAI) this week to attend the annual McDonald’s shareholder’s meeting. I was part of a terrific team of moms including Bettina Siegel of The Lunch Tray, Leah Segedie of Mamavation, Migdalia Rivera of MomsRising, Casey Hinds of KYHealthyKids, and Rosa Perea, a health educator on Chicago’s South Side. Also joining us was Greg Akili, a Los Angeles-based social justice activist.

In years past, CAI has attended the meeting and made statements to the CEO Don Thompson during the Q&A portion. Last year, a very brave 9 year old named Hannah Roberston was there and asked Thompson to stop tricking kids into eating food that wasn’t good for them.

This year, McDonald’s seemed intent on keeping CAI’s voice quiet. When our team of moms received name badges, ours were the only ones with big red stickers on them. A lawyer spoke to each of us, telling us that we weren’t allowed to tweet during the event. There was also a new Q&A policy: We had to write our question on a card and give it to them in advance. Only certain people would be called to the microphone, and only those people would be allowed to speak.

It was clear that the moms had been singled out–and that our questions would likely not be chosen. So Casey, Leah, and CAI’s Sriram Madhusoodanan worked around the new rules and read their statements before the proxy proposal vote.

During the actual Q&A, my name was the only one called from our team. I’ll admit that my voice and knees shook as I stood at the microphone to address the CEO and the room full of McDonald’s supporters. Here’s what I said:

My name is Sally Kuzemchak. I’m a mother of two, a blogger, and a dietitian. If McDonald’s advertising continues to target children, you will lose the trust of mothers–no matter how much you try to court us.

You claim that you care about kids, yet your ads during the Winter Olympics equate earning a gold medal with eating a Chicken McNugget.

You say it’s about families. Yet you continue to lure children with Ronald McDonald. In my own neighborhood of Columbus, Ohio my children paid no attention to our McDonald’s until a giant balloon of Ronald McDonald appeared on its roof.

Moms are watching. And what we’re seeing looks like what tobacco companies did a couple of decades ago, using Joe Camel as a kid-friendly mascot for cigarettes.

Mr. Thompson, you claim to have a commitment to moms and families, so how do you justify this incessant marketing to children?

His response? He clearly bristled at the comparison between Ronald McDonald to Joe Camel. He talked about their charitable work. He assured me they were all good people at McDonald’s. He said his own kids ate Happy Meals and turned out just fine, one was even a track star. When he was finished, there was a loud round of applause.

Everyone in our group had really powerful statements, though only a few of them were heard at the meeting. But you can read them all here:

Here’s the “Scarlet Sticker Six” as one person called us on Twitter (inspired by the red stickers on our name badges): From left–Bettina, Migdalia, Rosa, Leah, Casey, and me. 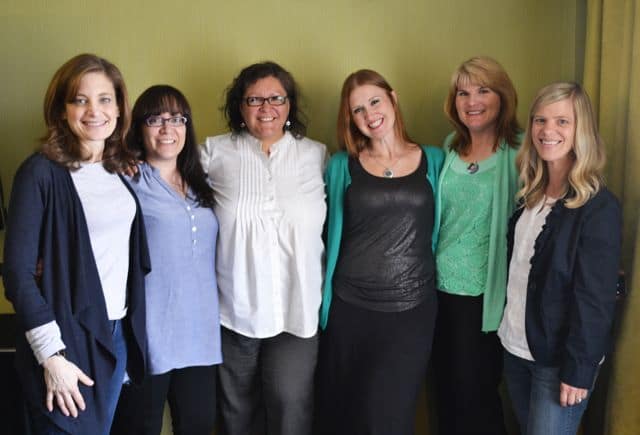 Here’s some news coverage of the event:

All photos by Corporate Accountability International

Category: Nutrition Advice + Ideas
Previous Post: « A Healthy Treat For Teacher Appreciation Week
Next Post: No Child Should Go Hungry This Summer: Here’s How To Help! »