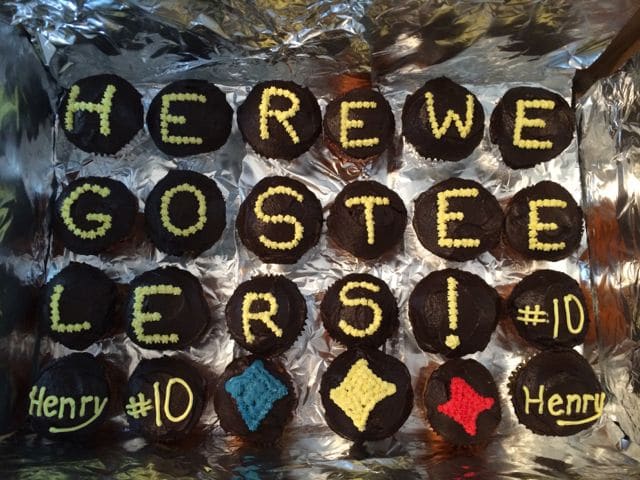 Recently, my 10 year old had his birthday party at an indoor trampoline park: a dozen friends, an hour of bouncing, and a party room for 40 minutes. Frankly, I’m usually too cheap to shell out for parties like this, but we figured we’d go big to ring in those double digits. Plus, any arrangement that doesn’t involve cleaning the house or a pack of rowdy 10 year olds running through my living room is a good deal in my book.

The party was during the dinner hour, and the package included pizza and soda (and even teenagers to serve everything!). I thought about how I wanted to handle this, but I didn’t stress about it. I also didn’t want to make a big deal about it with my son and turn his much-anticipated party into a fight with mom about soda. So I made a few tweaks behind the scenes. Here’s what we did:

*Fruit salad: I brought this from home and it was served with the pizza. And devoured. Some kids had multiple helpings.

*Cake: We baked homemade vanilla cupcakes with dark chocolate frosting and the recipe made enough for one cupcake per kid or parent.

*Goodie bags: Didn’t do them. My son never mentioned it, only one party guest seemed to notice their absence.

I know some people may have done things differently. But this felt like a good balance for us, between my son’s desire to have a regular party with pizza and soda and my own concerns about sugar overkill. Every parent has to do what feels right for them.

But what I’ve learned from hosting (and attending) an awful lot of kids’ parties is this: The real star attraction is never the food. It’s the fun, whether it’s bouncing on trampolines, roller skating, playing games, or just running around the backyard being silly. Food is often a distant third (or tenth) to everything else they’re doing and enjoying.

How do you handle food at your child’s birthday parties?

Category: Family LifeTag: birthday parties, soda, Sweets
Previous Post:Dinnertime Survival Guide: A Thank You To My Readers
Next Post:Why I Don’t Stress Out About Salt