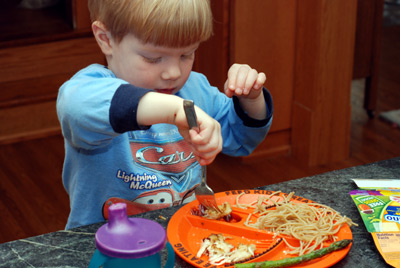 I don’t typically take pictures of my kids during dinner, but I needed photographic proof of this great turnaround. Sure, he didn’t touch the asparagus, but Sam happily ate his chicken and pasta.

My mother-in-law has a game she plays with the grandkids when they won’t eat their dinner. “Don’t you eat that broccoli!” she’ll warn in a voice that somehow straddles stern and silly. “Don’t you eat it!” First, the kids giggle hilariously. Then they eat the broccoli.

Frankly, I used to think it was all sort of ridiculous. Until I had kids of my own and started doing ridiculous things all the time.

At some point recently, likely out of desperation, we started playing this game with Sam. Because he’s a rather contrarian kid, who delights in doing exactly the opposite of what we want him to do, it went over like gangbusters. And with every bite he put in his mouth, my husband and I exchanged a look that said, “Really? It’s that easy?”

And while Sam’s been eating a lot more than usual, it’s all felt a bit like cheating–so I asked food sociologist Dr. Dina Rose for her take. Thankfully, she gave our dinner game the green light. “Kids like to play and interact with their parents, even while eating,” she explains. “Dinner is inherently boring for kids, especially grown-up conversation.”

Caveat #1: The motivation for playing the game should be to engage and have fun with Sam–not to persuade him to eat one more bite, says Dr. Rose. And yes, our game started out as a trick to get him to eat. But lately, it’s become something else entirely. We don’t initiate the “don’t-you-eat-that” game. Sam now begs us to play it. He even gives us our lines. “Tell me not to eat this delicious growing food!” he’ll say.

Caveat #2: Our game shouldn’t dominate dinner. “You shouldn’t have to play this game every night,” says Dr. Rose. “Your quality of life matters too.” When the game becomes grating, we should tell Sam we’ll play it four times, then we’re going to eat our meal. After all, she says, Sam needs to learn the conventional rules of mealtime and conversation. “If you let Sam be in charge of the meal by getting all the attention, you’re teaching him that you’ll do anything to get him to eat. Then he has all the power.”

1. Less is more. When Dr. Rose saw my before-and-after shots of Sam’s plate, she suggested I start putting less food on his plate, like just two bites of fish and one bite of broccoli. “When he looks surprised, tell him that he doesn’t seem to want to eat too much dinner so you want to respect that,” she says. Of course, I should also assure him that if he wants more, all he has to do is ask and I’ll get it for him. “This technique will instantly change the dynamic at dinner, and many kids respond very positively to it.”

I tried this with Sam at lunch one day, putting just two bites of sandwich on his plate. And just as Dr. Rose predicted, he was surprised. And when he finished his two bites, he asked for some more.

2. Dessert with dinner. Brace yourself for this one because it can be tough to swallow. This strategy comes from the Division of Responsibility playbook. The rationale: If you want to defuse the power of dessert, don’t make it the grand finale. Because when kids know there’s dessert coming, they rush through dinner to get there, without listening to their cues of hunger or fullness.

I tried this one night when a neighbor brought over a plate of fabulous chocolate cupcakes. They were in plain sight on the counter during dinner (my mistake) and Sam couldn’t stop asking for one. So I put one next to each kids’ plate of food. Henry ate his in three bites and continued with his dinner. Sam took one bite, decided he didn’t actually like the frosting, and turned back to his dinner food. 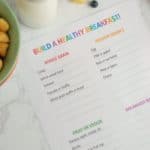 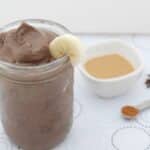 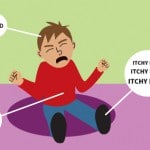