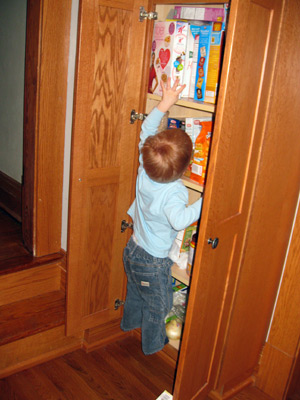 Pre-dinner snacks are tricky territory. Especially for toddlers. Feed them too much and you’ll ruin their appetite for dinner. Feed them too little and risk a meltdown that could ruin dinner for the entire family.

When I told food sociologist Dr. Dina Rose about Sam’s dinner boycott, one of the first things she asked about was snacking. And yes, Sam is a serial snacker–which most toddlers are (I wrote here about having to refer to lunch as a “snack” to get Henry to eat it when he was this age).

But in the hour before dinner, I try my best to lay down the law. After some trial-and-error (apple slices were too filling, a “couple of crackers” was a slippery slope) I have settled on offering the choice between two raw vegetables with some dip. If they want both, fantastic. And if they come to the table and eat even more vegetables with dinner, it’s just icing on the (carrot) cake.

Six months ago, Sam would respond to “Would you like red peppers or broccoli before dinner?” by climbing into the pantry and frantically grabbing cereal or granola bars. Now that he’s nearly three, he eats a little dish of veggies without much fuss on most nights. (Though truth be told, some nights he simply drinks the dip.)

But while I’ve gotten my pre-dinner routine under control, Dr. Rose says it’s the bedtime snack that could actually be sabotaging Sam’s dinners. Even though that snack occurs sometimes two hours after dinner and even though it’s always something healthy like fruit. “You’ve created a system where a preferred food is offered shortly after the meal,” she says. “It’s in Sam’s best interest to not eat his dinner food and hold off for his snack. And if you’re creating an incentive for him to not eat the meal, you’re making life more difficult for yourself.”

1. Reconsider the bedtime snack. Is he actually hungry or has it simply become routine? “Toddlers don’t really know if they’re hungry, but they know they want to eat because it’s fun or because they’re procrastinating,” says Dr. Rose.

2. Incorporate the preferred food into mealtime. By serving fruit (one of Sam’s faves) at the end of the meal each night, she says, I could keep him at the table and attach his preferred food to the concept of dinner.

3. Make the bedtime snack boring. Like a cup of milk, which is fairly uninteresting but has protein to provide a little staying power. (When mealtimes become more successful for Sam, she says bringing back more interesting snacks is fine.)

4. Dish out a serving of tough love. If I’m sure Sam is hungry at mealtime but won’t eat his food, explain that a bedtime snack won’t be served. “Say ‘I think the bedtime snack has become more fun for you than the meal, so we won’t be having snacks tonight’,” she advises. When Sam complains of being hungry later, I should give him the boring snack (see above) and explain that the feeling in his belly comes from not eating dinner. “Do this compassionately,” she says. For a child Sam’s age, I should repeat this a couple of nights before cutting out the boring snack completely and telling him he can have something later–at breakfast. In other words, Sam may have to go to bed hungry. You can read more about this approach here on Dr. Rose’s blog.

Frankly, I can’t take the thought of Sam, hungry and whimpering (who am I kidding–screaming) in his crib. It hits some kind of nerve and feels tougher to take than months of untouched dinner plates. But it’s something I will revisit in a few months if I’m still in this boat.

Dr. Rose says these strategies work together as a system, but for the time being, I’m just trying #2. I’m serving fruit with our dinners and one night, even some spoonfuls of yogurt on Sam’s plate. It does seem to make Sam less resistant to dinner and keeps him in his seat longer. Better yet, most nights he nibbles at the other foods on his plate too.

Stay tuned for next week’s post, the last part of the Dinner Drama Saga: Dinner Games & Other Crazy Tricks That Actually Work! 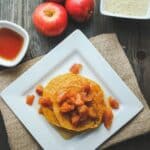 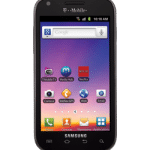 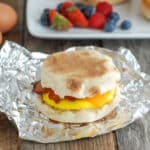