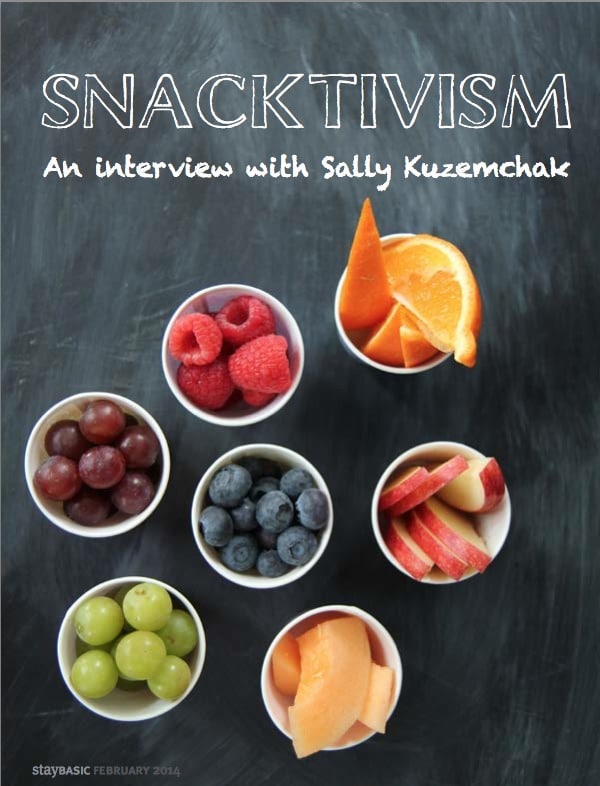 A few years ago, I got fed up with the Kool-Aid and cupcakes my son was getting after soccer games and vowed to make a change. I began talking to coaches and parents about providing fruit for post-game snacks instead–or even nixing snacks altogether (read: “What If Soccer Snacks Just Went Away?“). One day, a friend jokingly referred to me a “snacktivist”. That’s when Snacktivism was born. What do Snacktivists do? They help counter the current culture of snacking by providing healthier options at sports, after-school activities, church, camp, and anywhere kids eat. Snacktivism is also about asking the simple question: Do the kids even need a snack?

Recently,  I had the pleasure of being interviewed about Snacktivism by Mia Moran for StayBasic digital magazine. Here’s an excerpt about my experience with sports teams:

Mia: How did you approach coaches and parents? Was there any resistance from them, or from the kids?

Sally: A few years ago, I emailed the boys’ soccer coach and suggested we switch to water and fresh fruit, defining exactly what I meant by “fruit”, so parents wouldn’t bring things like gummy fruit snacks or yogurt-covered raisins, which are high in sugar and additives. I made a case for fresh fruit – it’s cheaper, it’s better for our environment, and it’s better for our kids – and I was pleasantly surprised that everyone agreed. Now when I approach coaches I say, why don’t we eliminate the snack altogether? I don’t think kids need a snack right after activities, if they live close enough that in just minutes they will home, and it takes an item off the parents’ to-do list. But kids like to hang around after the game a bit, sharing a snack together, and that’s fine. I approached different sports leagues to change to fruit and water only, but they didn’t want to dictate what parents could bring, so I approached the teams directly instead, and healthier snacking has been catching on. I even heard from people in my community that they’re seeing a lot more fresh fruit on the field these days.

I did get a little bit of resistance. Some people say, “it’s only once a week, a donut won’t hurt.” But if your children are involved in multiple activities, it’s more than once a week. And you also can’t always control how much your kid is eating – did he have one donut or three? I don’t get pushback from the kids, but sometimes I get it from the parents. When I was growing up playing sports, we didn’t even have snacks! Maybe we had orange slices at halftime. It’s the parents who invented this culture of the sports snack. And of course kids love it, because who wouldn’t want to eat Chee-tos or get a goody bag of candy? We can’t expect kids to say, “No thank you on the candy, I’m going to go home and eat a healthy dinner.” But kids love fruit as a snack, and people are on board with making better choices for kids, so overall the response has been overwhelmingly positive.

You can read the rest of the interview–as well as the whole issue–at StayBasic (use your email address to sign up and you’ll get a PDF of the issue).

A little bit about Stay Basic: After being diagnosed with a gluten intolerance four years ago, Mia started a blog about changing her diet, feeding her family, and losing the 65 pounds she’d gained over the course of three pregnancies. Two years ago, she launched the StayBasic digital magazine, which she produces out of her home with a small support staff. “I really liked the idea of creating something beautiful and inspirational for moms wanting to up the health in their family,” she says. “It also gives moms something they can print or save and reference digitally, without having to search too hard.”

I hope you’ll check out StayBasic–and if you’re doing work as a Snacktivist in your community, I hope you’ll tell me about it!

Dark Chocolate Mixed Nut Butter
Next Post:Donna Day: A Day & A Cause Dear To Me